FROM – OTHER WISE, A NOVEL

“Saw Margaret in town today,” Uncle Otis says. “Told me to get that right rear tire fixed ‘fore I end up in the creek.”

“There’s a right puzzler for you,” Mert says.

“Always at least three jigsaws going. Once when I was out there upgrading her electrical service, she finished out one of the big ones only to find a piece missin’. I woulda’ exploded, been me. But not her. Just said, ‘Well, what do you know. I been looking for the one with the yellow tip and it was among the missing all along.’ And she just moved on to the card table in the corner where she had a big round one going.

“When she saw me gawpin’ at it, she says, ‘This one’s a matter of finding the piece with the umpteenth gradation of black.’ And she laughs that laugh of hers. … Some say she’s a couple of pieces shy of a jigsaw herself.”

“Some say worse. Jacob Pill swears it’s the evil eye she’s got. Typical Jacob,” Otis says. “She just sees things differently from the rest of us.”

“Not only sees things differently. Sees different things than the rest of us!” Mert laughs. 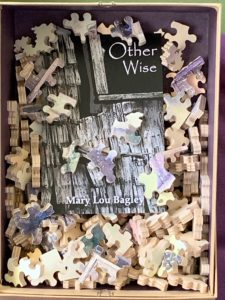 It wasn’t until I was seven that I heard someone refer to Nana’s dolls as “healing dolls” and to Nana as a “healer.”…

… When I was five, I remember asking her to make me a doll to play with like the one she was working on. Her fingers went quiet, hands coming to rest. The grandfather clock in the hall ticked. She lowered her chin to look at me over the tops of her glasses and said, “They spring from need and not from want or wish, Sweet Pea.”

FROM – “CIRCLE OF LEAST CONFUSION” (out of the Dark)

Everyone calls me Crazy Caroline. It used to make me want to cry. But not anymore. Now I don’t care.

Aunt Polly and Mrs. Klinka and Mrs. Lemons and Mrs. Juices tell me it’s okay to cry. They say it’s okay to care too. But I don’t. Let everyone laugh and make fun and call me Crazy Caroline if they want to. It’s not sticks and it’s not stones and they can’t break me because I don’t care.

FROM – “THE VIRGINIA GRACE” (Out of the Dark)

She thought she was alone in the house, of course, and I knew I should have left her be. I should have gone down the back stairs and out the kitchen door to my tree house. I should have. But I didn’t. I couldn’t help myself.

I settled on the stair landing and watched through the spindles of the mahogany banister. I breathed in the oily lemon smell of polished wood and the sicky sweetness of fat white candles burning on the mantelpiece below me in the darkened parlor where the shades were pulled, the drapes drawn. …

… there I sat in shocked silence, choosing not to tell Aunt Virginia Grace that I was home.

Nancy had seen the flamboyant woman often enough in the halls and lunch room at work, but had never met her. …

…So Nancy looked upon this caricature of a woman with amused indulgence. Poor thing, she thought, always calling attention to herself. Knows no better, of course. Hasn’t been taught that “less is more.”

Then came the day on the bench in the wind.

No, everyone called him Fester because they decided early on that it best fit his response to the world.